I haven’t written anything on this blog for the past two months. This is partially because I didn’t make time for it and partially because I didn’t have anything interesting to post to the world. I graduated last month and I got a job which is starting in september. It’s a traineeship where I get to work with three local companies, half a year at each. I know some local companies work in java a lot for their tech so I spent two weeks learning it in case it comes up. To learn it I decided I wanted to make something I’m really interested in. So without being too ambitious I decided to write a world simulator.

Sadly I didn’t get to the point of having monsters going around the map destroying towns and adventurers and armies trying to either save people or subjugate them. Nor did I get to the point of having a living economy with a food industry, famines, and farming technology. Neither did I create leaders with a learning AI, reputations and relationships, who decide daily whether to make peace or war. So what did I make? Just some trade route paths, really. 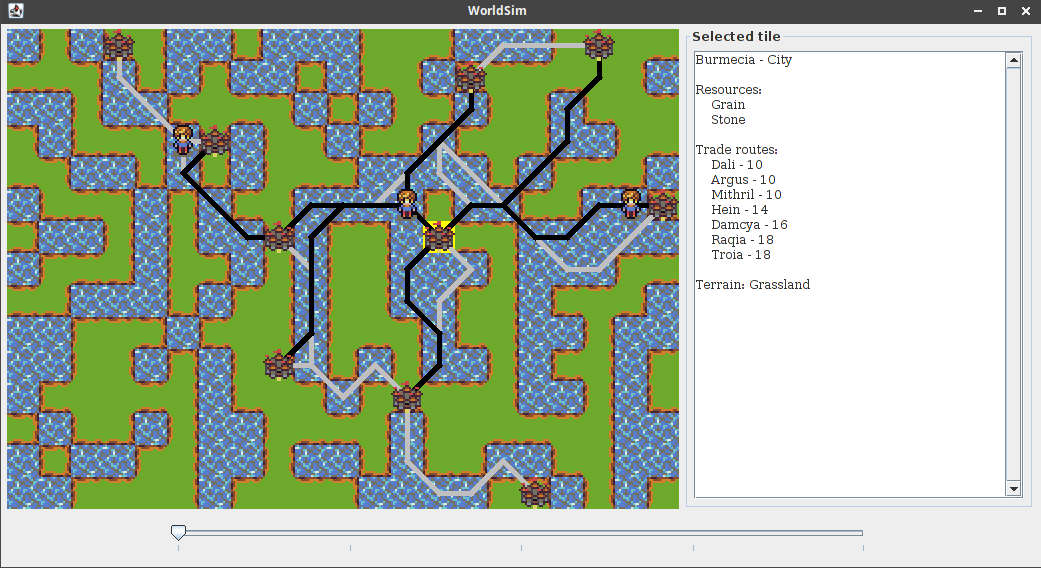 It may not be the epic I had in my head but I’m still pretty happy with it. The code is available on Github

Note: the jesus-figures walking on water are simply traders without a ship graphic, I wanted to add vehicle art, but didn’t get to it. The lines are trade routes.

so I’ll talk about how I did pathfinding, the code of which can be found in TradeNode.java.

I was already familiar with A* pathfinding, having used it in some previous projects like Pirate Kingdom, but found this algorithm wasn’t a good match when you wanted to find connections between many cities. Sure, I could have done A* for every city to every other city, but this would be an O(n²) algorithm in this case, which felt bad and unnecessary.

I found the best algorithm for my trade routes would be Dijkstra’s Algorithm, which is similar to the simpler breadth-first search (described here) but allows weighted edges. It expands from a starting tile outwards, always taking the tile that it can reach fastest first. I use it to iterate through tiles and stop it whenever the currently closest tile is beyond our maximum distance. And whenever it passes a tile which is a city, I add it to our TradeNode’s trade routes. Pretty understandable, right? Let’s look at the code.

The main pathfinding function is createTradeNetwork, called for each TradeNode after they’ve all been added by the WorldModel. It starts like this:

To be honest, this was a bit of a premature optimization. As the comment says it creates a rectangle in which we’ll use our pathfinding, so we don’t have to pathfind the whole world. What it doesn’t say is that currently the world is a pretty small place, and the rectangle only a little smaller. I didn’t like the idea of going over the whole world’s tiles, and if I did have a bigger world this would really help, but currently it just makes the code more complicated for not that much gain.

Our pathfinding uses different movement costs for different types of terrain. This is done with a number of constants defined at the start of TradeNode:

This means a trader can travel 9 tiles on water(18 / 2) or 6 on land(18 / 3). When moving through a city the movement cost is always 2, this is mostly so moving between close cities over land isn’t so costly (without it I had neighbouring cities prefering to take a boat then take one step over land!). SHIP_BOARD_COST is used whenever a trader goes from land to water or vice versa when there’s no city around. This cost makes it so traders can trade long distances over rivers without being able to go far inland, which creates a more realistic trade area.

The maxPossibleTradeDistance function is made so it returns the largest amount of tiles one can travel in one direction, no matter how these constants are configured:

Moving on, all points within our pathfinding rectangle are added to a queue, which is really a set:

Here distances is a HashMap that stores the shortest distance we’ve found so far to get to each point. Since we haven’t tried getting to any of these points yet we initialize their distances to the largest integer possible. Next:

This initializes our own location to have a distance of 0 (since that’s where our trade node is!) and makes it so if distances gets a null it also returns MAX_VALUE.

Now the interesting part begins, the loop itself:

Where getMinDistPoint simply returns the point in the queue with minimal distance using the distance HashMap (by looping through each value in the map). Since we set our location to be 0, and all others to be MAX_VALUE, it will always start with our location.

It checks if the distance is larger than our maximum distance (if so, we should stop pathfinding), and removes the point from the queue. Then it simply checks if there’s a city at the current point, and if there is it will add this point to our list of trade routes. The actual route to get to this point will be possible to find using the nextPoints HashMap that we’ll populate in the following loop. We loop through every neighbouring point around the current point:

Direction is an enum class containing each cardinal and ordinal direction. d.move(p) returns a point that is point p moved one tile in direction d. We check if the neighbour point is within bounds of our pathfinding rectangle, and if we’re moving land to land we disallow diagonal movement (I did this so ship movement and land movement can’t cross on diagonals, which would be weird).

Then we calculate the distance by getting the movement cost between the current point and the neighbour, and adding this to the distance it took to get to our current point. If this distance is less than the currently fastest distance to get to this point, we update its distance and set its value in nextPoints. This means that for this point (neighbour), the fastest route to get to our TradeNode’s location so far is to go towards point p. Dijkstra’s algorithm works so every point within range of the TradeNode’s location will have a nextPoint, so you can keep iterating on this to get a path from anywhere in range to the TradeNode. See the drawTradeRoutes function below to see how this is used.

In the end we sort all trade routes based on distance, simply to list them more nicely in texts:

That’s the whole function, now we have all the pathfinding data we need to get from city to city. You can see how pathfinding is actually used by the looking at how they’re drawn in the WorldMap:

Here, getTradeRoutes simply returns the list of trade routes for the trade node, and getNext returns the nextPoint for a given point. Each trade route is a start point, we start drawing lines from there and on each tile we ask the trade route what the best next tile is to get to it in the fastest way, and move to that. If we arrived, the getNext function will return null. You can also see how traders use trade routes in the Trader class.

An obvious improvement to the pathfinding algorithm would be to use a PriorityQueue instead of a HashSet. Java actually has one of these built in. The interface for this class is a bit obnoxious when you want your own compare function though, because it requires a Comparator. So you have to write a whole boilerplate class just to specify a comparison function. It could have been avoided easily if Comparator was a “Functional Interface”. But it’s not because some guy thought it was a good idea to give the Comparator a completely unnecessary equals method next to the compare method. This means you can’t write a lambda function for it. Oh well.

You could probably also avoid the need for the pathfinding rectangle completely by just taking the start point and adding neighbours to the queue if they are in map bounds and within the maximum distance. That’d simplify and make it faster.

Other random things I’ve learned from this mini-project:

If you’re interested you’re free to fork or improve WorldSim on Github. I have some ideas on cool stuff to add there as well. Myself, I’m going to work on other stuff. I’ve started on a 13th age web app in golang to help me with my tabletop roleplaying group. Then in september I’ll start getting busy with my new fulltime job. I also want to return to working on the OpenRA map generator so I can finally finish that and get it merged. And with all that I want to keep writing blog entires as well. So I’ll be busy enough.